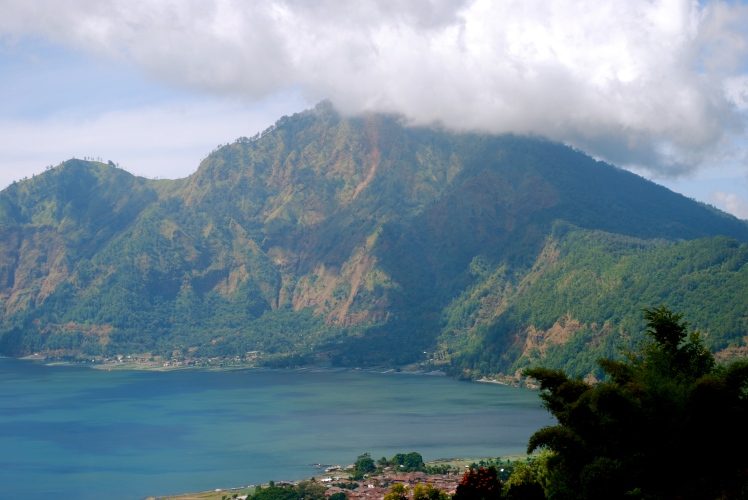 There is a long, dense line of volcanoes running through Indonesia, and Bali has its fair share – two live volcanoes on this 2,000 square miles island.

We left home around 10 am and drove north through Kintimani, down into the crater created long, long ago by Gunung Batur (5633 feet), an active volcano that last spewed a wee bit of lava just a week ago.  There is a huge, indigo blue lake in the center of the crater, Danau Batur, the largest lake on Bali.  We drove half way around the lake and parked, walking into the village of Kedisan to visit an old acquaintance of D’s.  The woman was an actress originally from Australia who has lived in this secluded little town in northern Bali for over twenty years.  When she came to the door, she was verging on hysteria and couldn’t invite us in, “A bundle of nerves with a solo performance in Jakarta tomorrow so nice to see you please go away.”  So we did, driving through the black, hardened lava fields where farmers were growing rows of shallots wherever the gritty dirt was deep enough.

D told me about the village of Trunyan on the opposite side of the lake.  Living just under the summit of the mountain are the descendants of the original Balinese people, the Bali Aga.  Their cultural and religious practices are completely different from the rest of Bali – they practice the old religion (not Hindu). The Bali Aga are thought to be the original Balinese people who fled the Javanese invaders, eventually finding refuge in the solitude of Bali’s remote mountains. Only two villages of Bali Aga people remain.

They are not fond of tourists, which isn’t much of a problem for Trunyan; to reach the village one must cross the lake – there is no road.  The Bali Aga are well known for their unique practice of dealing with the dead.  They do not cremate or bury their dead, but just lay them out in bamboo cages to decompose. Supposedly, the dead bodies don’t produce bad smells because of the perfumed scents from a huge Taru Menyan tree growing nearby.  I didn’t row over, so I cannot attest to this!

On the way back down, literally down the mountain and also towards the south, we stopped at the bamboo community of Penglipuran where D had another friend.  This friend was much more cordial.  We sat on the steps of his home in a typical Balinese walled family compound, where grandparents, parents, brothers and their wives and children live.  Each family has their own little building for sleeping, there is the family temple, communal kitchen, and “living room” which is a pavilion open on three sides with a roof and very often a television.   The friend then took us for a walk through the bamboo forest behind his home – Penglipuran has 75 hectares of bamboo forest, with three different types of bamboo growing there. 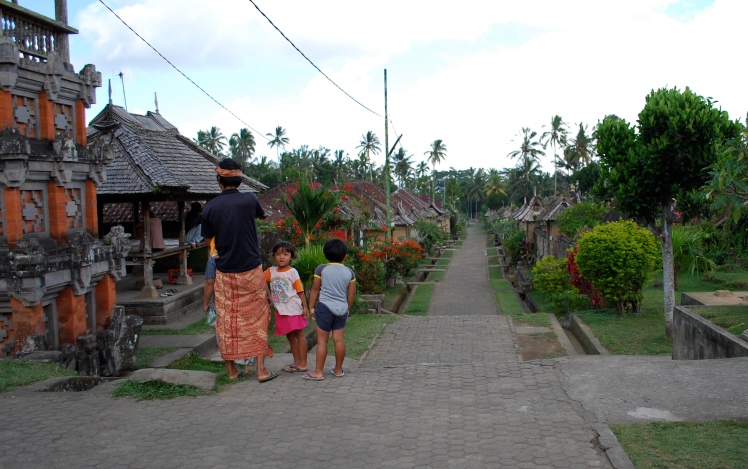 It was a lovely, clean, village with a beautiful village temple. The village architecture consisted of earthen brick structures with bamboo and wood roofs. The quality of the work was quite beautiful.  The village is also known for its bamboo woven ceilings and partition walls. Unfortunately, in many parts of Bali the old style architecture has already come to an end, so this village was a treat to visit. The bamboo is harvested by the villagers for sale, as well as for their crafting.  Not only is bamboo beautiful, it is the strongest and fastest growing woody plant on earth; if you are interested, The Environmental Bamboo Foundation is a great site for more information.

We then continued our trek home.  It was 3:00 pm, and having skipped lunch, we were hungry.  We stopped at a roadside café serving Lombok style food, and D asked if I would like baked chicken again.  I figured I was safe saying yes.  She was also kind enough to order “not hot” for me.  First came the ubiquitous bowl of white rice.  Then the also ubiquitous bowl of stir-fried Asian water spinach, topped with bean sprouts and peanuts.  On the side was a bowl of mild sauce (in my repertoire, hot) and medium sauce (on my tongue known as very hot).  Then came the bowl with the chicken.  It was a “young chicken” evidenced by its very small size.  It was tied in a knot and cooked over the outdoor fire behind me.  Unfortunately, its head had not been removed, and it was looking at me.  I gently turned the plate so it was looking at D instead, broke its neck, and proceeded to pick off the rest of the meat to put on my rice.  Again, no utensils used at these roadside restaurants, Balinese style, so D captured me in a photo, eating with my fingers.  Yup, I think my mom and sister would have gone home hungry.