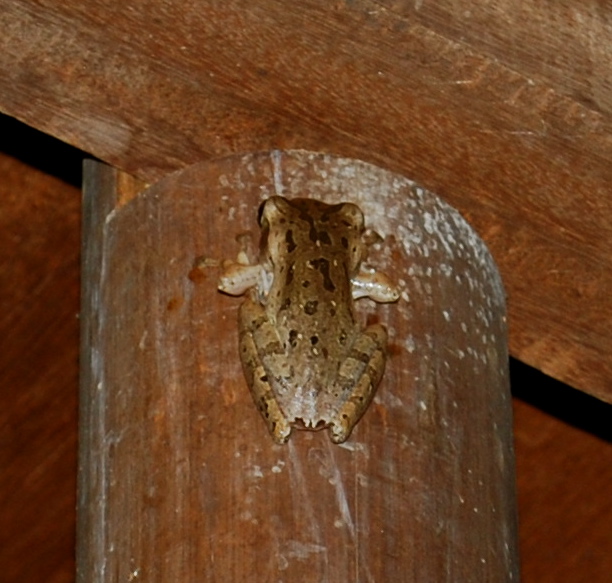 I didn’t drink any tea after dinner last night, so I didn’t have to worry about snakes and lizards and things that go bump in the dark when I walk downstairs to the bathroom at 3 am!  I plan to be just as wise this evening.  I am reading The Kris of Death, a murder mystery set in Bali.  The writing is …rather…. , but it is an interesting ex pat perspective of Ubud and the artists living there.  It isn’t scary, so it won’t keep me up tonight, either!

Yesterday was a rainy, shopping extravaganza for me.  I left home around 8:30 am, up the steps out of the ravine and around the prawn ponds, along the river path to the road. 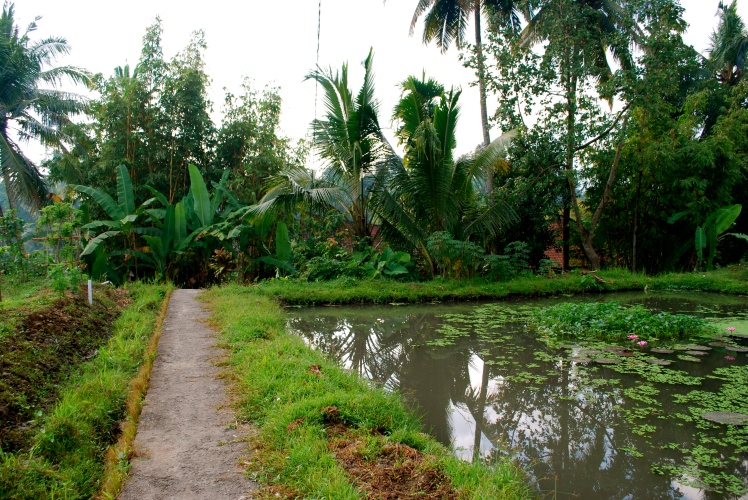 I followed the curves and twists of the road through the village (and the gauntlet of dogs) to the main road. 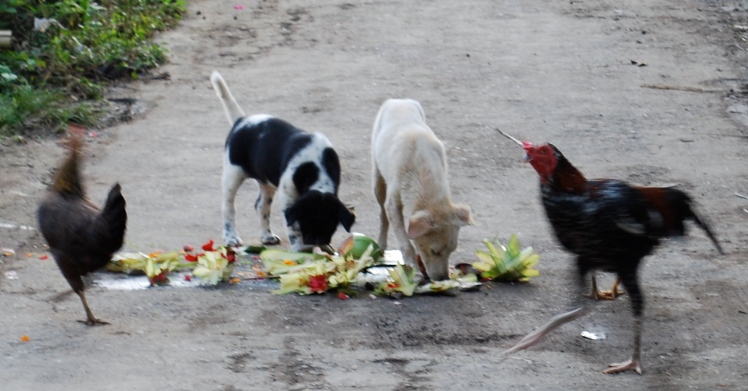 There I waited for a bemo to drive by.  The first one hailed was not going to Ubud (it was orange, not blue), so I waved it on.  The second one was blue, and I climbed aboard.  A bemo is a tiny van with benches lining the back, and the door removed for easy access.  As we bounced down the road the driver tried to engage me in conversation, but since his English was limited and my Indonesian nonexistent, not much was communicated.  I was able to explain where I wanted to go: the ARMA Museum.  Once we reached its front door, the price for the ride suddenly quadrupled since he had to go off his normal route.  I figured I could afford the $2.00, however, and passed it to him.  He tried to convince me I needed him for a ride back, but I already had arrangements.

The ARMA is an art museum owned by a private Balinese citizen and was quite impressive.  The German artist Walter Spies, a painter who came to Bali in the 1927, is represented at the museum, as well as numerous Balinese artists from ancient to modern time periods.  The entrance fee was $2.50 – 25,000 Rupiahs – everything is so inexpensive here.  The museum was three different buildings housed on beautiful grounds, and I really enjoyed a quiet morning there.

An interesting character – Spies was one of the first Westerners to come to Bali and fall in love with the beauty of the country and the culture. In December 1938, Spies was arrested as part of a crackdown on homosexuals. With the influence of people such as Margaret Mead, he was released in September 1939.

As a German national in the Dutch East Indies during World War II, Spies was again arrested and deported. However, a Japanese bomb hit the ship that was carrying him to Ceylon, and because the crew refused to evacuate the Germans without orders from an officer, most of the prisoners on the ship, including Spies, drowned.  Such a sad end to the story of a talented, generous, gentle man. 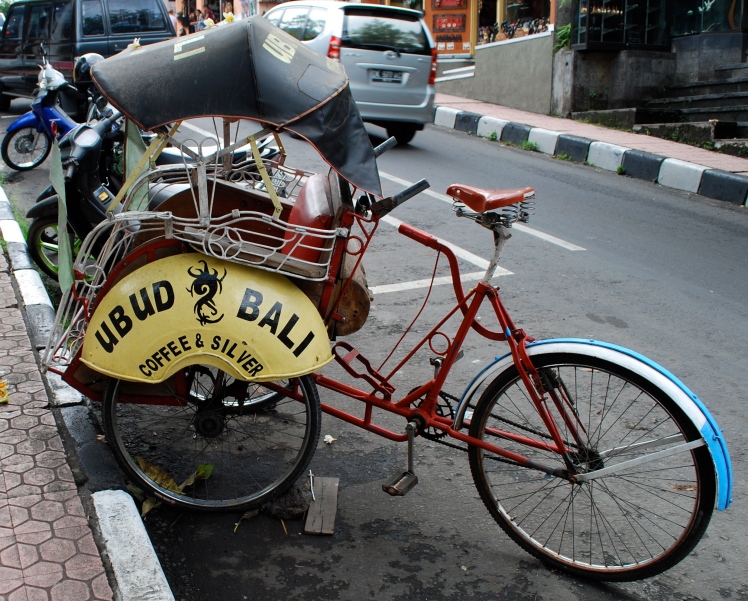 It started to rain as I emerged from the museum, and of course I had no raincoat, umbrella, or even a plastic bag!  It rained off and on, sometimes really hard, for the rest of the day, so I was a sodden mess.  I walked and walked and walked and walked.  I also stopped for some lunch in a lovely, three tiered restaurant, where I took advantage of the menu and had fresh pineapple juice, croissant with butter and jam, and a cappuccino.  It was delightful after all the tofu and organic healthy stuff I’ve been eating lately!  I didn’t tell D what I ate because she would have given me a hard time – all that white flour and sugar and caffeine!  I window-shopped, made some purchases at the market, and stopped for a late lunch.  Along with deep friend spring rolls, which were to die for, I had two lattes!  Yum, the coffee is so good here, and since I have only tea at home, it was really fun to indulge.

D had an afternoon meeting with a new co-teacher, and they picked up my sodden self at 4 pm at a predestinated corner (Pizza Bagus, where I had a mocha shake with real ice cream!!), and we proceeded to Green School so they could interview a possible assistant.  Just what I wanted to do with my dripping backpack.  I forgot my phone was in an outer pocket, and will have to purchase a new one when I get home.  It is so humid here, it takes forever for anything to dry out, so I was soggy for the rest of the evening.  We toured the school grounds (climbing half way up a mountain to get there) and interviewed the young woman.
The Green School:

Delivering a generation of global citizens who are knowledgeable about and inspired to take responsibility for the sustainability of the world. 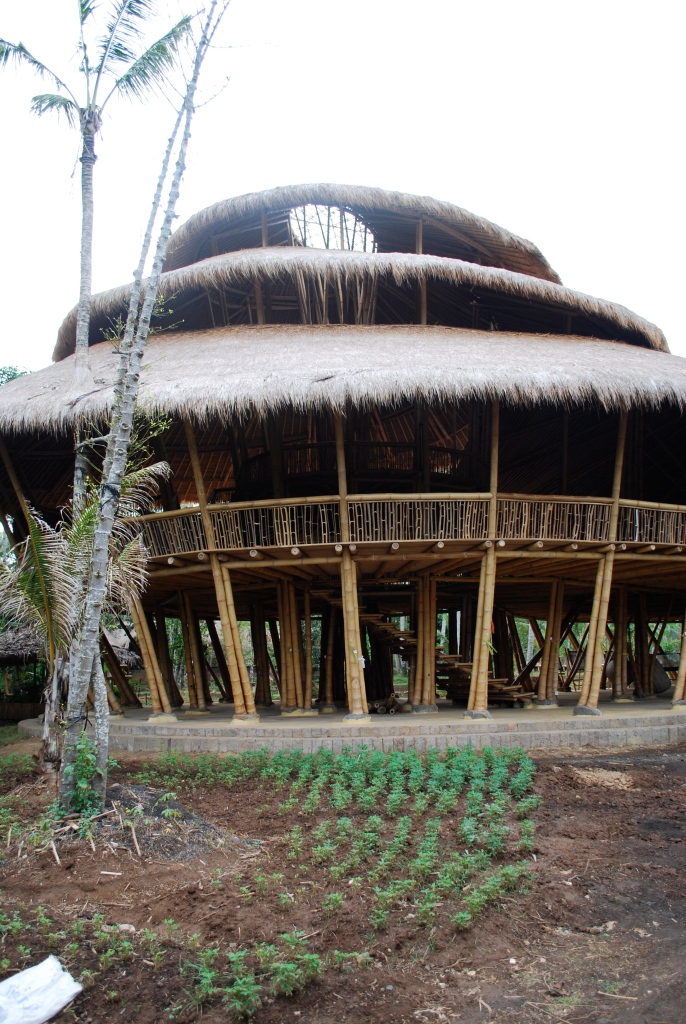 You don’t need walls in Bali

We finally made it home around 8:30 pm, and I was ready for a shower and my mosquito net cocoon. 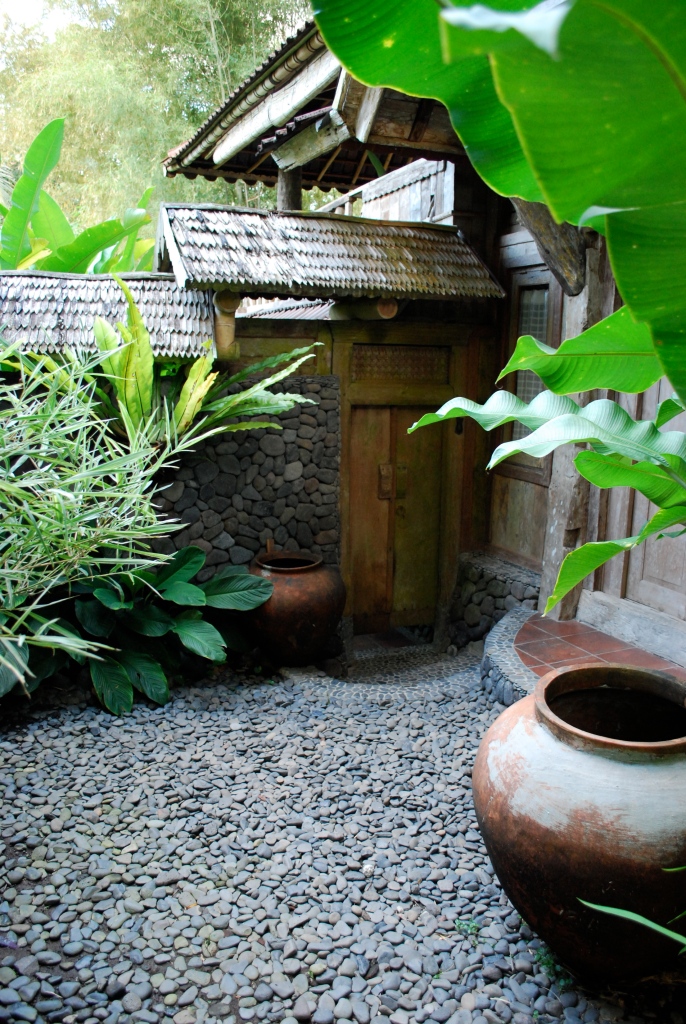 Unfortunately I’m not used to all the caffeine, so I spent half of the night awake,  listening to the rain patter on the roof tiles, and the river pouring down the hill next to my house.

When I woke up in the morning – Yikes, youch, OUCH!  Fire ants had invaded my bed, and they bite.  I have little welts everywhere.  There sure are a lot of insects and various other creepy crawlers here.  Give me a good, old-fashioned housefly!

I was happy to not be going anywhere today, and put my shoes and backpack in the sun to dry.  I can see across to D’s living room from where I am sitting, and I am watching Ketut put the finishing touches on my first jacket.  It looks beautiful from here!

D and her son Yanni have head lice, which has me more freaked out than the snakes, lizards, and the huge toad I kicked in the dark last night, walking home.  Cross fingers the lice stay away from my head. 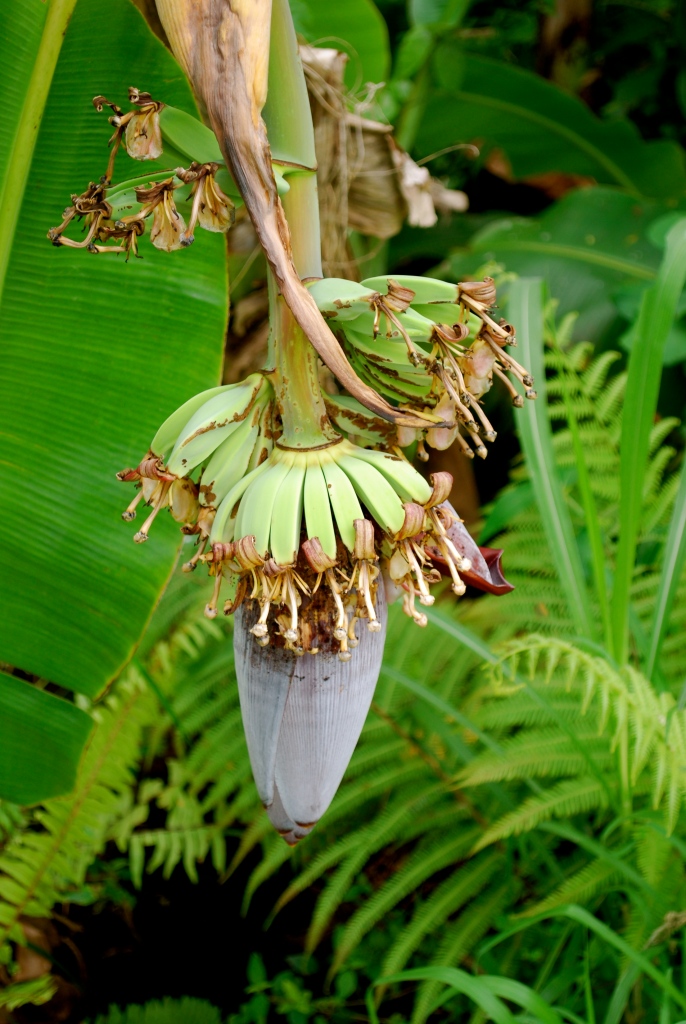