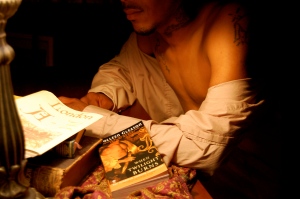 It started with Carl’s challenge at Stainless Steel Droppings:  create a photo with Colleen Gleason’s latest book, include the book in the photo, and send it in to the contest.  In order to create the photo with the book, I had to buy the book.  I was happy to support the author with her first week of sales.  Of course I love buying books, but I have never read a vampire book, other than Bram Stoker’s Dracula. (Colleen Gleason also has a Wordpress Blog that is fun.)

Once I had created the photo and sent it to Carl, I had this vampire book on my hands.  Now the problem was, this book was the fourth in the series.  Obviously you can’t start a series with the last book.  Thus I requested one, two, and three from my library.  In a few weeks, I had all three books, and they sat, lined up on the table next to my bed.  I wasn’t too excited about starting the first chronicle. Romance and vampires….. just not me.

The night came when I had nothing lined up to read.  Except for The Rest Falls Away.  So I started reading.  I stayed up late.  I read the next day.  And the next.  Finished it and started Rises the Night.  It was better than the first.  And I finished that and went directly to The Bleeding Dusk.  Yes.  I was addicted.  When I finished When Twilight Burns, I was sorely disappointed because there was no where to go from there.

Characters, plot, setting: it all works, and gets increasingly better with each novel.  This is the sort of book that really stretches the old “suspend your disbelief” while reading.  On the one hand, the Victorian era is described so realistically, I am so grateful I didn’t live then.  The dresses with the little roses around the hems, the garters to hold up stockings, the corsets.  Yuck!  But imagining Victoria Gardella leaping around a formal garden, fighting the undead in all this paraphernalia, was a bit of a stretch.  I didn’t mind making the stretch because I was so taken with Victoria, her mission, the historical era, and the array of love interests.  Oh yes, the love interests.  If her mother only knew!  I really didn’t know which one to root for; they were all so delectable in their own, very different, ways.

Book three and four bring up the vis bulla quite a bit.  This is a silver cross worn by the Venator (vampire slayer) as a piercing, somewhere on their body, and it gives them extraordinary strength.  It occurred to me that a vis bulla I had created for myself fifteen years ago, sat languishing in my jewelry box.  Of course I didn’t have vampires in mind at the time, but I think it might work.  I may need to have it blessed, however.

From the cover of The Rest Falls Away:

Beneath the glitter of dazzling 19th-century London Society lurks a bloodthirsty evil… .
Vampires have always lived among them, quietly attacking unsuspecting debutantes and dandified lords as well as hackney drivers and Bond Street milliners. If not for the vampire slayers of the Gardella family, these immortal creatures would have long taken over the world.
In every generation, a Gardella is called to accept the family legacy, and this time, Victoria Gardella Grantworth is chosen, on the eve of her debut, to carry the stake.
But as she moves between the crush of ballrooms and dangerous, moonlit streets, Victoria’s heart is torn between London’s most eligible bachelor, the Marquess of Rockley, and her enigmatic ally, Sebastian Vioget.
And when she comes face to face with the most powerful vampire in history, Victoria must ultimately make the choice between duty and love.

I recommend the series to you. If you have second thoughts in the beginning, don’t stop before reading at least half of the first book. I guarantee, you will have changed your mind by this point.

This review is also a part of SSD R.I.P III challenge, so I accomplished two projects in one fell swoop!  On another spooky note, I have included some graveyard pictures I took a few years ago.  I have an extensive collection of head stone photos – I think they are beautiful.  And sometimes, they are entertaining… 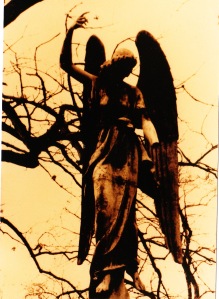 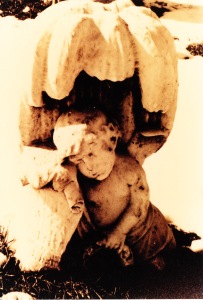 8 thoughts on “The Gardella Vampire Chronicles by Colleen Gleason”