All hotels rooms are booked…… try an AirB&B booking.

Enjoy the festival, the museum, the plant and all that the

beautiful city of Milwaukee has to offer –

and that is a lot more than beer and cheese!

please see this listing and inquire. House is available

for the full week.**

All Roads Lead to Milwaukee

The sun was shining, temperature in the 80’s.  A perfect afternoon to head to the lakefront.  Derek and I jumped in his car and drove east.  It took a little while – remember, Harley Fest is happening.  We parked on the top of the bluff and walked down, and there they were.  Thousands upon thousands upon thousands.  And then some.

Every way you looked, there were more bikes.

Some were parked, others were riding.

Some were painted with beautiful designs or pictures.

I believe many Harley guys spend more time revving their engines than actually driving anywhere; I sometimes wonder why they bother to have wheels on their motorcycles.
Dave Barry

Some were just beautiful.

I always wanted one of those…..

Then we left Lincoln Memorial Drive and entered the grounds.  Talk about leather!

People are more violently opposed to fur than leather because it’s safer to harass rich women than motorcycle gangs.
Anonymous

As I said in the earlier post, people came from all over the world.

There was the bat bike. 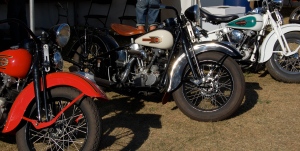 98% of all Harleys ever sold are still on the road. The other 2% made it home.
Anonymous

There were so many people…

And there were cars, too.

They were having fun along with everyone else.

It made me want to go back to my past.  I didn’t know how dangerous motorcycles were then.  My dad had one, for heaven’s sake!  The only rule was I had to wear a helmet.  My daughter calls me a hypocrite because I will not let her ride.  She tells me when she is old enough, she will be on that cycle with her lip pierced and sporting a tattoo.  I hope she gains some sense in the next two years.

But I know what she wants.  I wanted it too.

And I to my motorcycle
Parked like the soul of the junkyard
Restored, a bicycle fleshed
With power, and tore off
Up Highway 106 continually
Drunk on the wind in my mouth
Wringing the handlebar for speed
Wild to be wreckage forever.